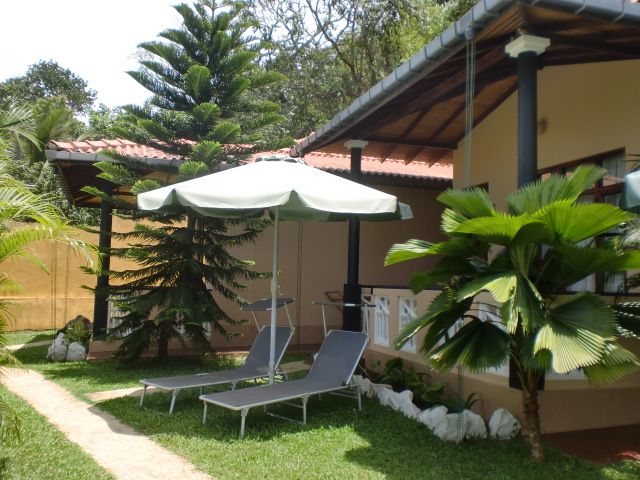 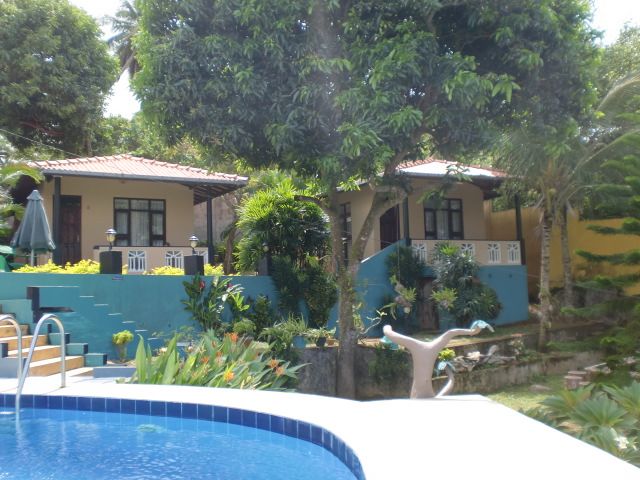 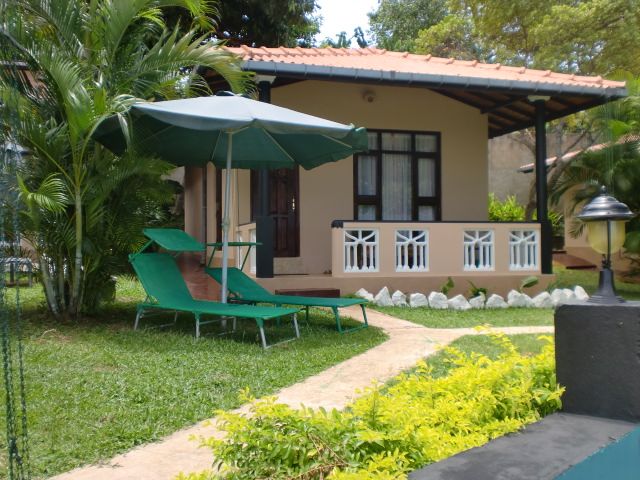 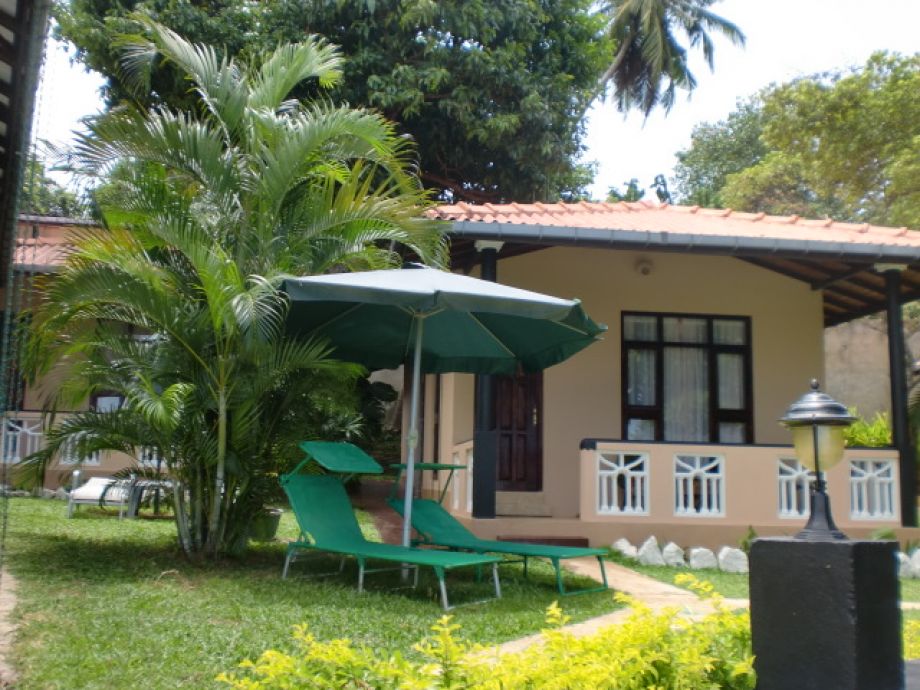 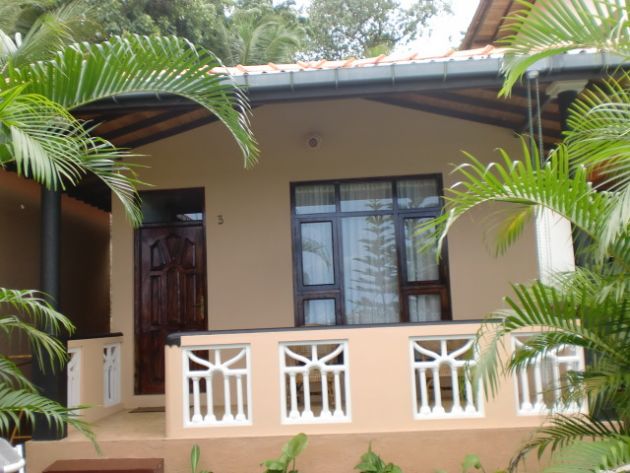 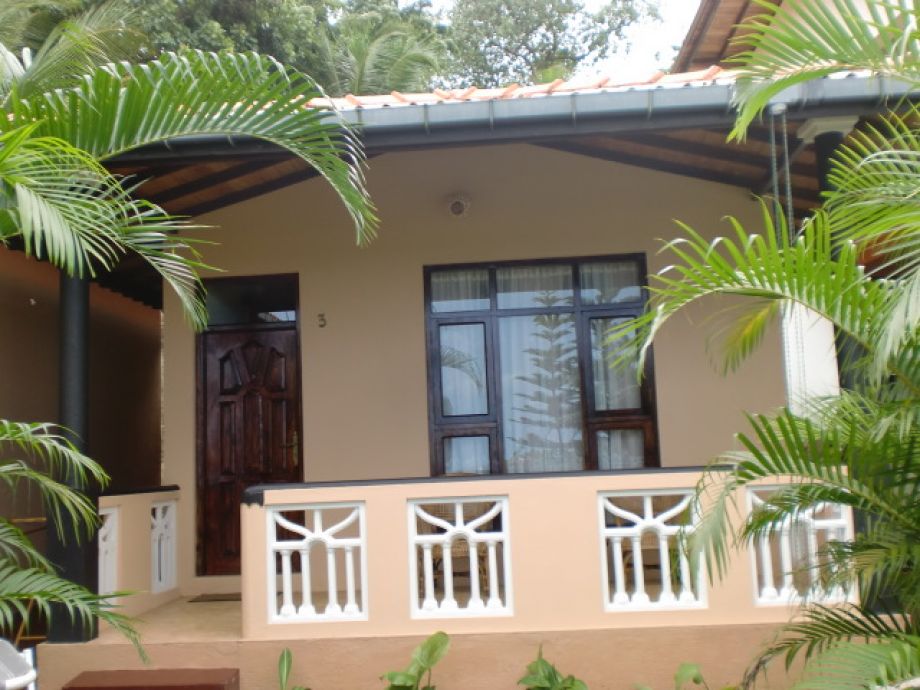 Beautiful again provision with units small hotel with any comfort and fantastic increased Hanglage in direct proximity of the most beautiful beach of Sri Lanka' s south coast. All rooms are styleful furnished and have any comfort. The restaurant with fantastischer outlook on the whole bay offers European and nationalauthentic specialities. In the midst of the hotel plant is the tropical garden with wonderful plants and trees. Transfer and div. Trips are offered by the hotel.

The hotel stands under the direction of Renate Baumann. 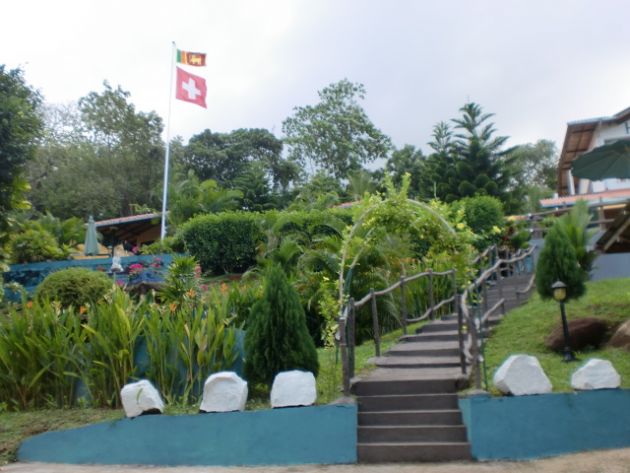 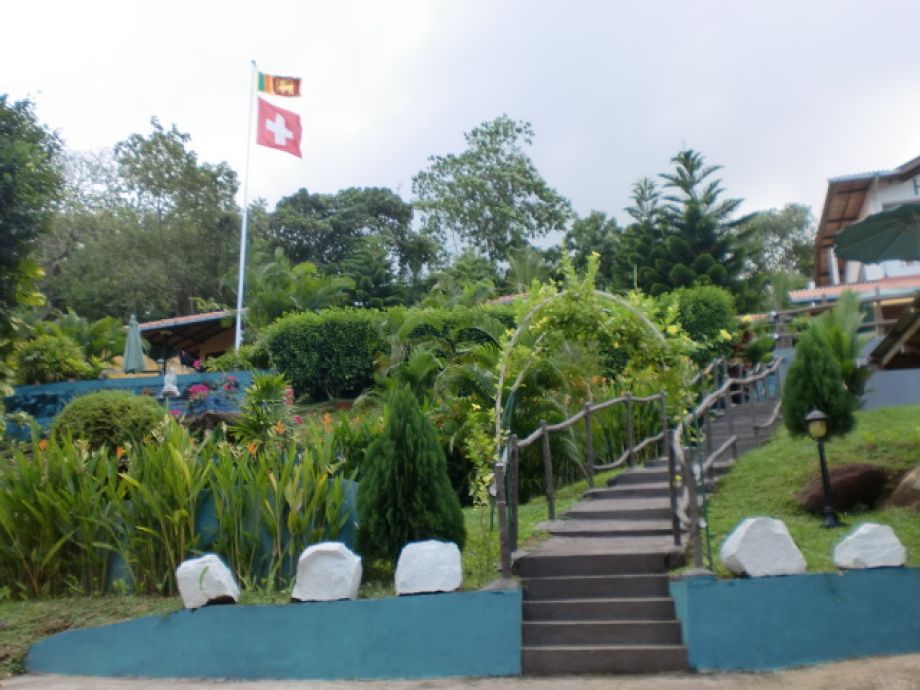 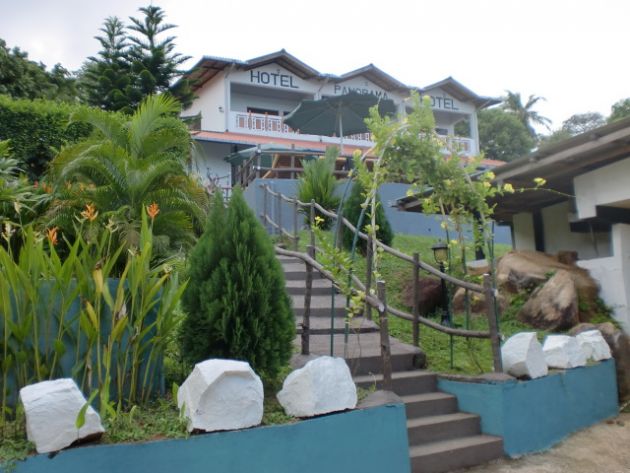 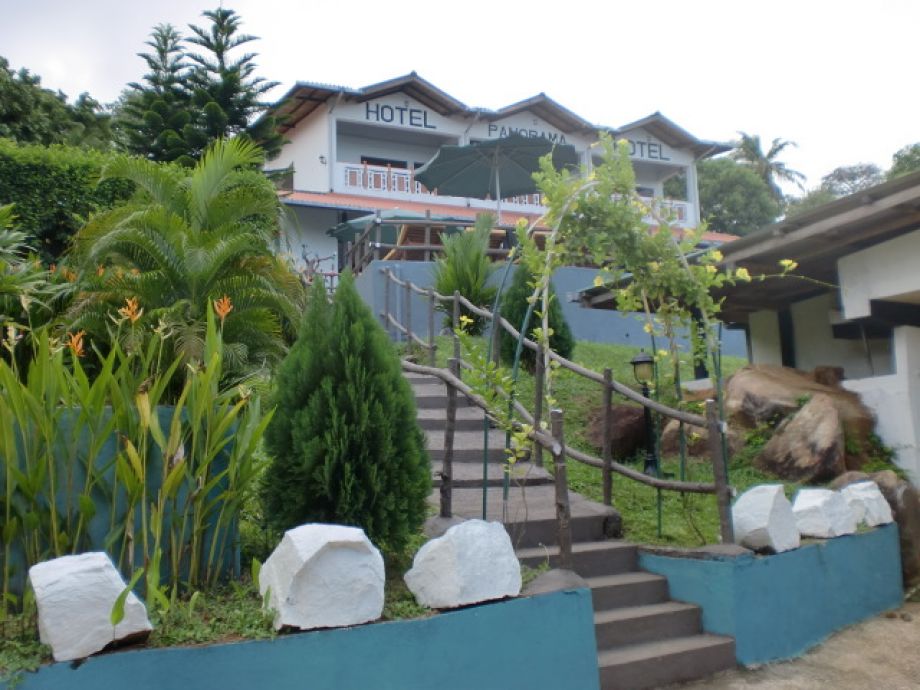 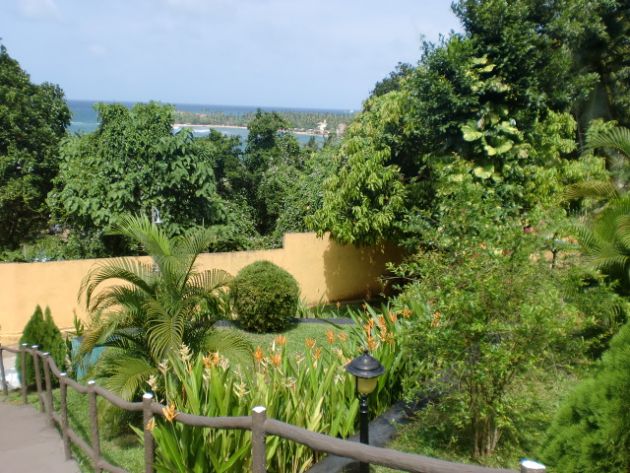 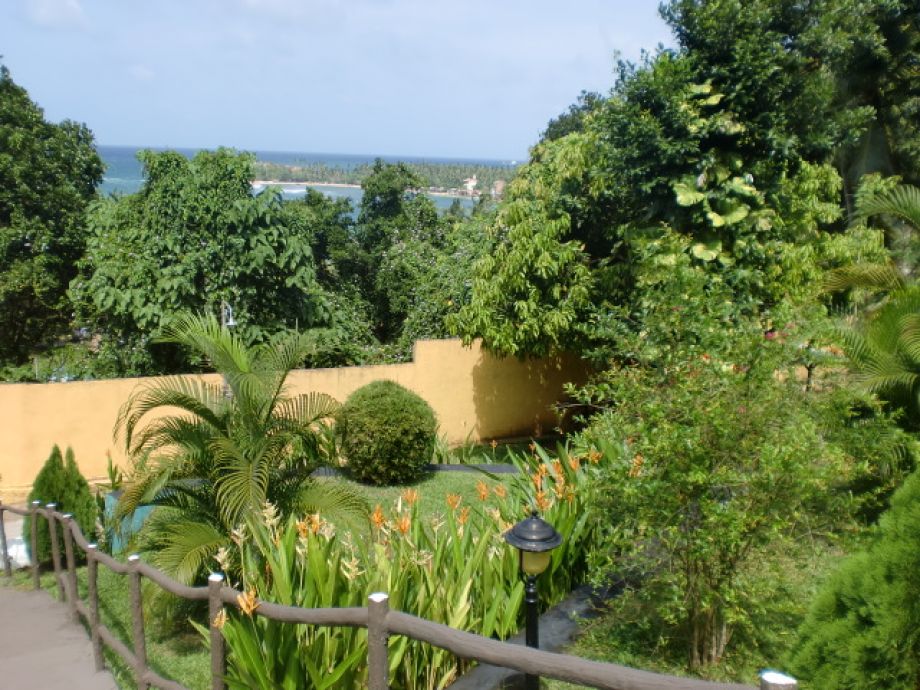 All price in Hotel Panorama add 10% Service Charge For booking a Room, deposit required is 30% of the total booking amount We don`t accept any Credit-Card Balance to be paid directly to the Hotel in Cash.

the most beautiful small hotel in Unawatuna,

a popular resort in southern Sri Lanka. The large open dining room, overlooking the sea, the large modern rooms with the corresponding wet rooms, the beautiful lawn and the short walk to the beach, make a holiday here a pleasure. Renate Baumann, the Swiss owner of this gem also offers optional dinner, to (advance) Asian and European dishes.

On request, we will extra charge, a shuttle transfer from Colombo directly to our site.

The journey is mandatory through the air or over water, where the goal is generally Colombo (or the Bandaranaike International Airport. An arrival by train, bus or car is only available to South India.

- Kandy - beautiful city in the center of the island, site of the Temple of Tooth
- Jaffna - Tamilenhochburg in the far north
- Punguduthivu
- Mannar
- Colombo - the capital of the west coast
- Galle - port city with a generous Fort
- Hatton - town in the highlands, near Adam's Peak
- Pinnawela - village with elephant orphanage
- Trincomalee - Tamilenstadt on the east coast
- Kalutara - beach town located on derSüdwestküste
- Tissa - Südostküsste, near Yala Park
- Hikkaduwe - Surfer

Sri Lanka, officially to 1972, Ceylon (: Democratic Socialist Republic of Sri Lanka) is an island nation in the Indian Ocean, 31 km off the southern tip of the Indian subcontinent. The island is also called the pearl of the Indian Ocean and has about 20 million inhabitants.

Their location makes the island a strategic hub for shipping between the West and Southeast Asia. She was one of the centers of ancient Buddhism. Today the country is a multi-religious and multi-ethnic nation, are in addition to the mainly Buddhist, Hinduism, Christianity and Islam are major religions. The Sinhalese make up the bulk of the population. The Tamils are the largest minority. Other communities include the Muslim Moors, Malays, Burghers and the Sri Lankan native who Veddas. Sri Lanka is known for the production and export of tea, coffee, rubber and coconuts. The island is due to its scenic beauty and its rich cultural heritage is a popular tourist destination.

Sri Lanka was ruled for two millennia by various local kingdoms until the 16th Century, large parts of the island from the Portuguese and the Dutch were colonized. 1815 was the country part of the British Empire. During the Second World War, Sri Lanka served the Allies as a strategic base in the fight against the Japanese Empire. Since the beginning of the 20th Century grew the desire for independence, which was fulfilled in 1948 after peaceful negotiations by the British. (Mospagebreak)

The climate of Sri Lanka is tropical with different rainfall conditions due to the effects of the monsoons. Due to its location between the 5th and 10 north latitude, the country has a warm climate with gentle breezes and high humidity. Average temperatures range from 16 ° C Nuwara Eliya in the Central Highlands (where there may be even in the winter snow and frost) to 32 ° C in Trincomalee on the northeast coast of the country. The average annual temperature for the whole country lying between 28 ° C to 30 ° C. The coldest month is January, while May is the warmest month.

While the southwest of the country (see climate diagram Colombo) constantly humid, with two distinct rainfall maxima in May and October, brings the southwest monsoon in the north and east coasts of little rainfall, because there is this area in the lee of the central mountains. There, covered most of the rainfall during the northeast monsoon in November and December (see climate diagram Trincomalee). The rainfall pattern is influenced by the monsoon winds from the Indian Ocean and the Bay of Bengal and is determined by the four seasons. The first season is from mid-May to October bring, when southwest winds moisture from the Indian Ocean. When these winds hit the central highlands, caused heavy rain on the mountains and in the southwest of the country. The east and northeast of the island received little rain during this time. The second season will take place in October and November. During this time, there are periodic gusts of wind and sometimes tropical cyclones bring cloudy weather to the island. In the third season, December to March, the northeast monsoon brings moisture from the Bay of Bengal in the north and northeast of the country. The last season will take place from March to mid May and there will be little rainfall.

| Spiess Web GmbH | Webdesign | Webhosting |all in one |